Dr. Maria Lagana is a veterinarian in Danbury who firmly believes in treating all of her patients as if they were her own pets. 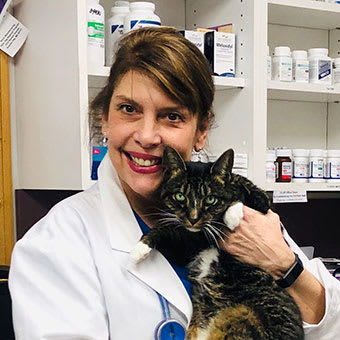 Dr. Lagana was raised in Westchester County in an animal-loving family. She spent her youth motivated by a desire to assist animals in need. Horses were and continue to be her passion. Her family and friends were not surprised when she pursued her dream of becoming a veterinarian. She earned her undergraduate and DVM degrees from Cornell University, where she was a leader in animal welfare organizations. She also worked in the field of epidemiology while pursuing her studies.

Dr. Lagana began her career after graduation at South Salem Animal Hospital and was one of the founding veterinarians at Noah's Ark Animal Hospital. She eventually opened her animal hospital in Westchester County, where she enjoyed years of success.

Dr. Lagana returned to the area to practice after selling her practice and is delighted to be back at Noah's Ark. As a veterinarian, she believes in treating all animals as if they were her own.

Dr. Lagana resides in Newtown, Connecticut, with her husband, Dr. Schleiter, who practices at Danbury Hospital, and her numerous rescue animals. During the summer months, she enjoys spending time at her lake house in Brewster, NY.

Happy Tails From Our Clients

Noah's Ark Animal Hospital is accepting new patients! Our experienced vets are passionate about the health of Danbury companion animals. Get in touch today to book your pet's first appointment.

Send us a message online.